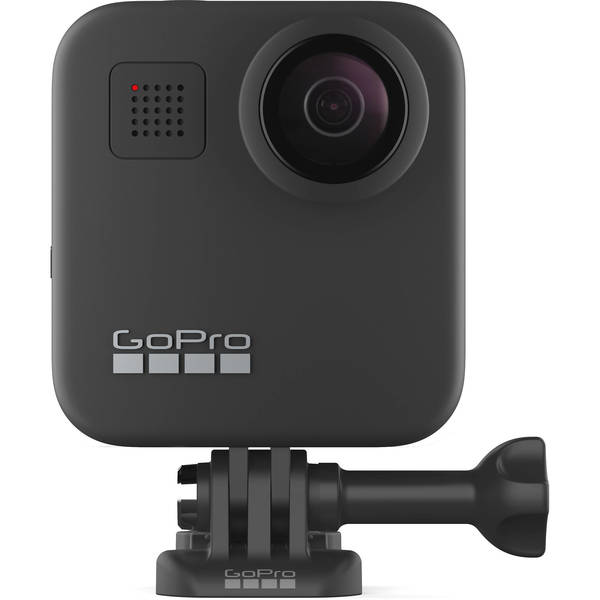 The GoPro MAX 360 action camera is GoPro’s second attempt at 360-degree video after the GoPro Fusion and is capable of spherical video capture up to 4992 × 2496 at 30 fps to one microSDXC memory card. Key features include:

GoPro Fusion Successor. Lets get this out of the way. The GoPro MAX is better in every way than the GoPro’s previous 360-video attempt, the GoPro Fusion. The MAX adds a single microSD card with internal stitching, single camera options, and true Ambisonics audio capture.

Internally-Stitched, 5K, 360-Degree Video. The main purpose of the GoPro MAX is to record spherical 360-degree video in as simple a manner as possible. A single microSD card and internal stitching goes a long way to make this a reality. The 4992 × 2496 resolution video is sufficient for VR headsets and 2D screens, but keep in mind that the MAX is still considered entry level, and there are higher quality options like the Insta360 Pro 2 or Insta360 Titan.

Single Camera Video & Photo Modes. The MAX has a HERO mode that makes single lens recording easy, but recording resolutions are much more limited than an actual GoPro Hero8 Black. The only available options are limited to 1440p or 1080p up to 60fps. The MAX also features a photo mode for single shot panoramics and standard 360 or cropped photo capture.

Other Notable Features. This camera has upgrades over the HERO8 in both TimeWarp and horizon leveling thanks to the spherical view of the camera. HyperSmooth stabilization is at least comparable and GoPro and features like live streaming and an app for tweaking settings and making simple video edits. The camera is powered by a redesigned battery that will run the camera for roughly one hour of shooting.